Solution home On Boarding Starting with Workflows and Sequences

The purpose of this note is to describe what the execution steps are when executing a workflow.

For each task in a workflow, several steps will be executed before and after the task.

Before all, you may decide to abort execution or to bypass it.

If you decide to execute it, several call will be made before execution, if the execution succeeded and if an error occurred.

Here is the flow of execution for a single task. This flow will be executed for each task in your workflow. 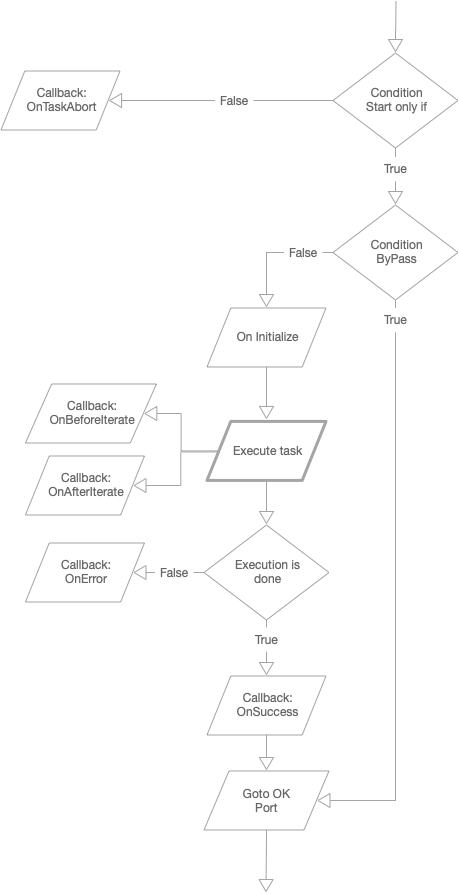 This is our first step: Should we even start the task execution. It defines under which condition a task will execute or not. If not, execution will stop.

We want to execute 1 out of 3 choices based on what the user has chosen as a cloud_service.

Each task a Start Only if condition such as:

Depending on the gc.cloud_service value the corresponding task will be executed of not.

If “Start Only If” condition is False then the task won’t be executed and on Task Abort callback will be triggered. This callback could be used for cleanup for example.

In the main tab of each task.

The second step defines whether a task will be executed or bypassed. If bypassed, execution will then continue to the next task.

Use Bypass if you want an optional task execution and you want your workflow to continue execution.

In the main tab of each task.

Execution of the task itself. Several callbacks will be triggered on Initialize, error and success.

Some code executed before the task execution. Useful to initialize some values.

Executed if an error occurred.

Executed if your task succeeded.

In the Callbacks tab of each task.

You may notice that each task may have different callbacks available.

During these execution steps, you may use webhooks to communicate the status of your task execution to external systems. Webhooks (also called a web callback or HTTP push API) is a way for your app to provide other applications with event based information.

Enter the URL to call and the events you want to trigger and you’re done.

Did you find it helpful? Yes No

Send feedback
Sorry we couldn't be helpful. Help us improve this article with your feedback.